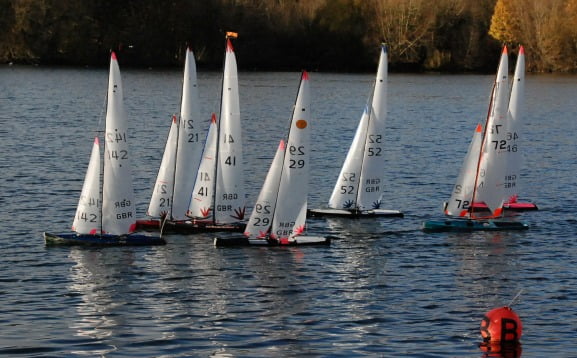 The furthest travelled competitor, Bill Culshaw from Shropshire, sailing a GRUNGE, won this event with seven wins from the two UPROARS that were successful last week at the Mermaid.

Three Rivers RYC’s wasted no time and gave competitors 15 races, an amazing number considering the start in no wind and very little during the day, with the constantly varying wind coming from every direction from south-west to north-east and creating a constantly course setting headache for Race Officer, Peter Popham and his team.

As well as the wind problem, the water level was low and so launching was sometimes difficult for deeper keeled Marbleheads, which grounded just out of reach of the launching area. This problem was aggravated because after every race most boats had to come ashore to check for weed, as just small strands were picked up by everyone in the majority of races.

Despite the problems everyone enjoyed the event, which started by a win for David Adam sailing a PRIME NUMBER from Rob Vice’s UPROAR. Races 2 & 3 were won by Roger Stollery sailing his UPROAR from Rob and Bill Culshaw. David came back to take Race 4 from the consistent Rob again. Bill, with some good starts found his form to win three races on the trot from Roger, Martin Crysell sailing a PRIME NUMBER and John Carter sailing a ROK.

At the brief lunch interval Bill was top of the leaderboard with 12 points followed by Roger with 17 and Rob with 18.

There was a little bit more wind after lunch, but still very variable allowing Roger to make a perfect port tack start as the wind backed during the start sequence and lead to the finish in front of Rob and Martin. Bill took Race 9 from the consistent Rob.

In Race 10 there was an amazing 90° wind shift allowed the leading boats to change tack without any change in their course and without any rudder movement! Roger won from David and Bill. At last Rob’s consistency paid off with a win in Race 11 from Bill and Alf Reynolds sailing a 25 year old upgraded PARADOX with a fancy bow, a permanent version of his usual parcel tape construction, and the hull painted in camouflage colours.

Bill succeeded in avoiding any weed to win the next three races, maybe by following pretty well exactly the same course each time. Finally, Roger won the last Race 15 from Martin and Alf.

At the prize giving Peter Popham thanked competitors for making his job easy as there were no raised voices, no protests and the sailing was very much more gentlemanly than the IOM racing he is used to. The winner of the Stan Cleal Trophy, Bill, thanked Peter for running a good event in difficult circumstances. Runner-up Roger reinforced Bill’s thanks to the 3R team of John Male, John Rance and Tom Roger.

This event was the penultimate Marblehead GAMES event and the finale will be at Guildford Model Yacht Club for the BRASS MONKEY event on 10th December.

Are you interested in Radio Yacht Sailing? We welcome everyone from beginners to experienced skippers.
Get In Touch
© 2020 - All Rights Reserved
Back To Top