This World Championship was hosted by the R&ZV club in Reeuwijk, Gouda, the venue for the Dutch National Championships for the last few years and well known to several GBR sailors. Everyone enjoyed the event, despite wet conditions in the middle of the week. The Dutch were very hospitable and sailors were made very welcome by this full-size sailing club, which was very well appointed and provided excellent facilities for the 69 competitors, their partners and spectators.

Racing was carried out from a raised square control area at the end of a long jetty, part of which also acted as the launching area. It allowed the simple windward/leeward courses to be set at any angle to the control area with the start and finish in the centre. This worked well except that it was a bit too small for the 17 competitors, 4 umpires, their buddied observers, race officers etc and made seeing your boat difficult at times.

Informal racing started on Sunday and was as much practice for the umpires, race officers etc as it was racing for the competitors. The wind gradually blew up throughout the day and at the end some boats were in their C2 rigs.

The racing
The championship racing started on Monday 7th July and after a slow start, racing gathered pace so that at least 20 heats were sailed each day, giving competitors at least 4 races. The wind was NW light and fluky, particularly at the windward mark where it blew over the trees and houses. The 4 leading boats on the first day, Brad Gibson, Graham Bantock, Joop de Jong and Ante Kovacevic set the pattern that was to run throughout the whole event.

Tuesday’s racing featured continuous rain and wind in a similar direction, but towards the top end of A rig. This did not deter either competitors or officials who pushed the racing on to achieve 25 heats and at least 5 races per competitor. The standard of racing was high in whatever heat you were in and the keenness at the starting line led to several general recalls.

It was wet again on Wednesday but there was more wind, again from the NW, so these Formula 1 boats made a great spectacle, flying downwind in B or C rigs. Control was sometimes difficult in the gusts at the leeward gate with rudders and sometimes the whole stern end of the boat showing above the waves. Races 9 to 14 were won by either Brad or Graham who won 4. Ante took three 3rd places and Peter Stollery took a 2nd and 3rd.

It was all change again on Thursday with hot and sunny weather, but a light wind that was gradually shifting from NW to WSW. There was very little wind and some delays when the wind died to almost nothing. Race 15 was won by Mateo Longhi sailing a TRAMONTANE design. In Race 16 Brad and Peter were unlucky at the gate as they were in the leading group, but had to give water to the 2 leading inside boats. However this allowed water for all the following boats and they ended up at the back of A heat and were demoted into B. This race was won by Yannick Rossignol also sailing a TRAMONTANE design. Brad got out of B and went on to win Races 17 and 18.

The final day did not start well as there was no wind and fog, but this gave the opportunity to take lots of good photographs of the various national teams and interviews with the leading competitors and these can be seen on the website http://www.rmworlds2014.com

Racing did get started at 12 o’clock in a light westerly breeze and Race 19 was won by Remi Bres sailing an old MARGO 2 design and the final race was won by another FRA skipper Marc Pomarede sailing his TRAMONTANE design with Brad in 2nd and 3rd places in those races. However Brad’s consistency throughout the event allowed him to retain his World Champion’s title by a big margin with his GRUNGE design.

The organisation of the event
Harry Drenth managed the heats and scores from his computer in the control tower with information on screens in the clubhouse, boathouse and at the control tower. This was in lieu of the normal ticket board and generally worked well, except that the marking up of observers often appeared late, which caused some problems with observers not realising that they should be observing, despite having looked at the screen several times. The buddied observer/umpiring was generally better than the previous world championship, but there are still issues to be addressed. Apart from not being able to see all of the course easily, there were often problems with the course itself with starboard end bias of the start lines and the bias and distance between the marks at the gate, not achieving the benefits normally expected by competitors. However all of the race committee and organisers worked hard and were thanked for their efforts at prize giving.
The GBR team enjoyed themselves both on the water and in the social gatherings in Gouda itself, which is a beautiful town with some lovely buildings. The success of Brad Gibson retaining his World Champion’s title and being hard pressed by Graham Bantock with Peter Stollery and Darin Ballington also in the top 10, was the icing on the cake. The standard of all the boats and sailing was very high and many of the GBR team found themselves in a lower heat than they expected.

The boats
The standard of the boats and sailing was high with many more own design and built boats from AUS, NED, SUI and GBR matching the performance of ‘production’ boats. Whilst most boats were made of carbon fibre there was one beautiful Italian boat planked in timber. All were narrow with draughts just over 600 mm, but not many to the maximum of 700.

As a designer this event was very interesting, because of the great range of hull designs taking part, far outnumbering previous occasions and shows great international enthusiasm for the class. In addition there were some older hull designs upgraded with new foils and rigs. Darin Ballington’s ROK is a good example, where this 15-year-old hull design has been modified by a longer fin and lighter bulb set further aft to keep the bow up. By careful tuning of his conventional rig he was able to compete with swing rigs, which are now used almost universally for the A rig. My own CRAZY TUBE design is also 15 years old and has recently had the same treatment with a David Creed fin and bulb and a reduction in displacement, now getting close to that of an IOM, but with 3.3 kg of ballast at the end of a deep fin. Swing rigs are used on every suit and the recent development of offset pivot swing rigs for the lower suits for stronger winds has been particularly successful at the RM Nationals at Keighley as well as Gouda. The sail plan is the same as a conventional rig with a big jib, but to ensure that the jib does not overpower the mainsail there is a pivot in normal swing rig mast position 75 mm in front of where the mast is fitted into the tubular swing rig fitting. Peter got his best results on Wednesday using this arrangement for his C rig.

More information about upgrading older Marblehead designs can be found on the Marblehead Class website www.marbleheadsailing.wordpress.com. 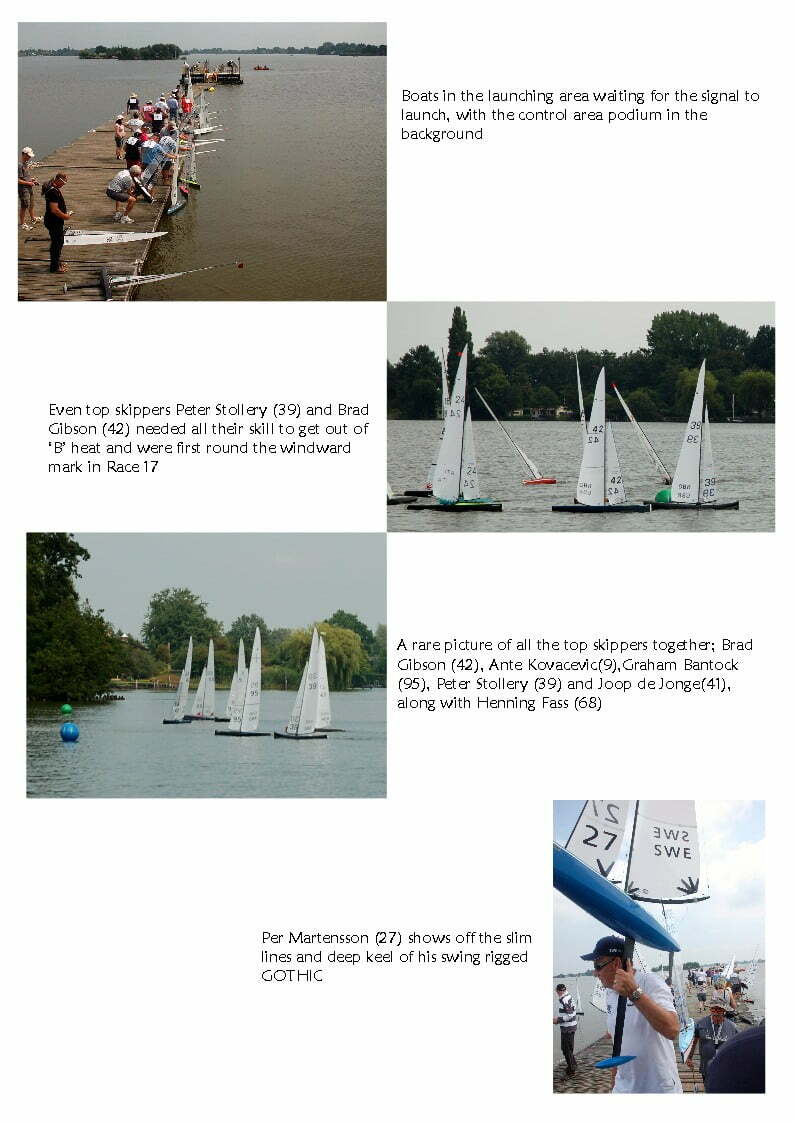 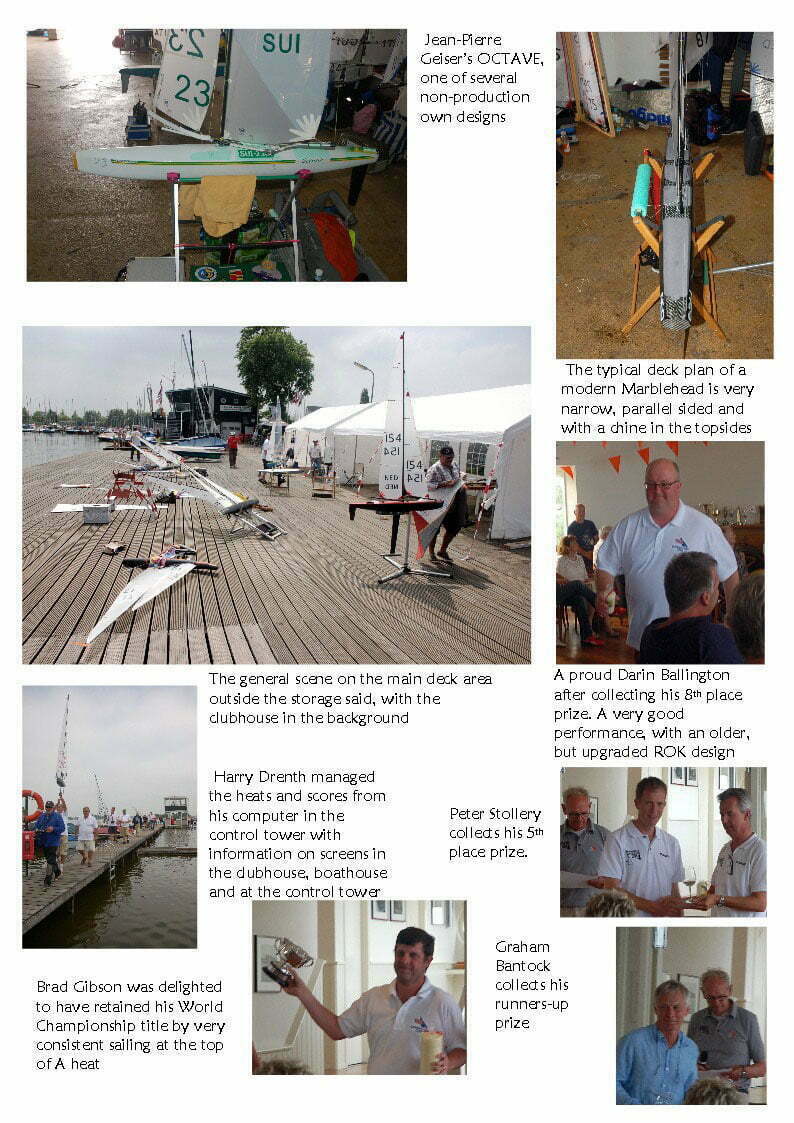 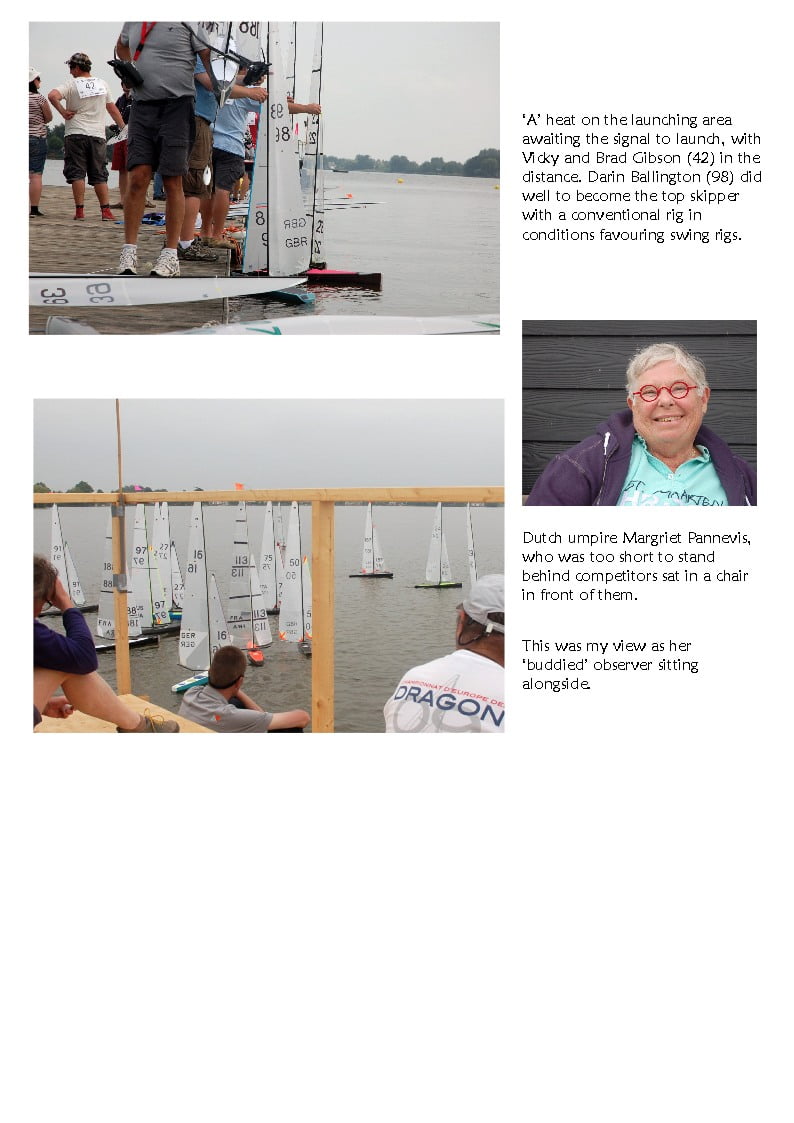 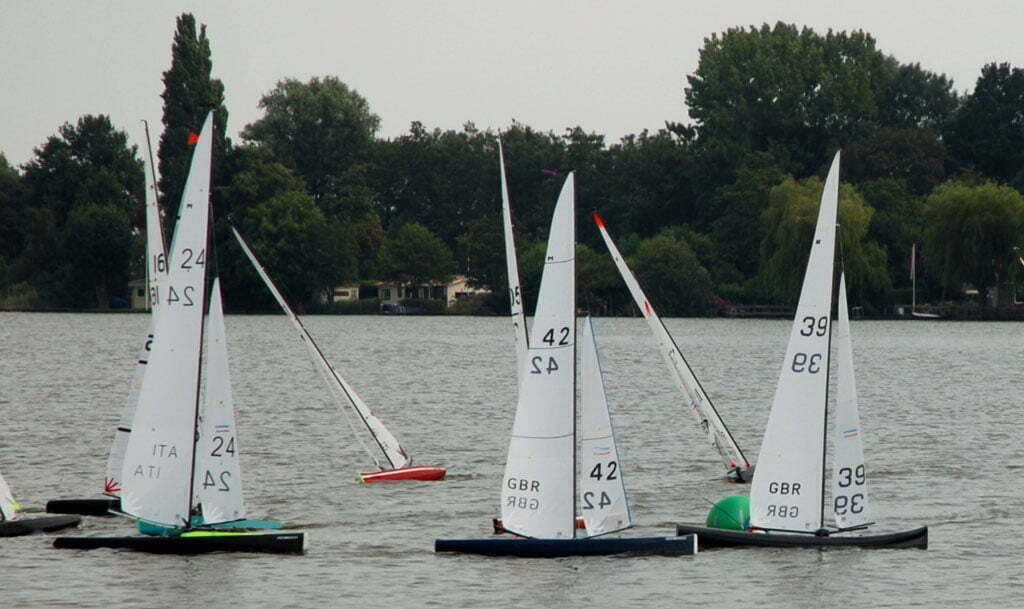 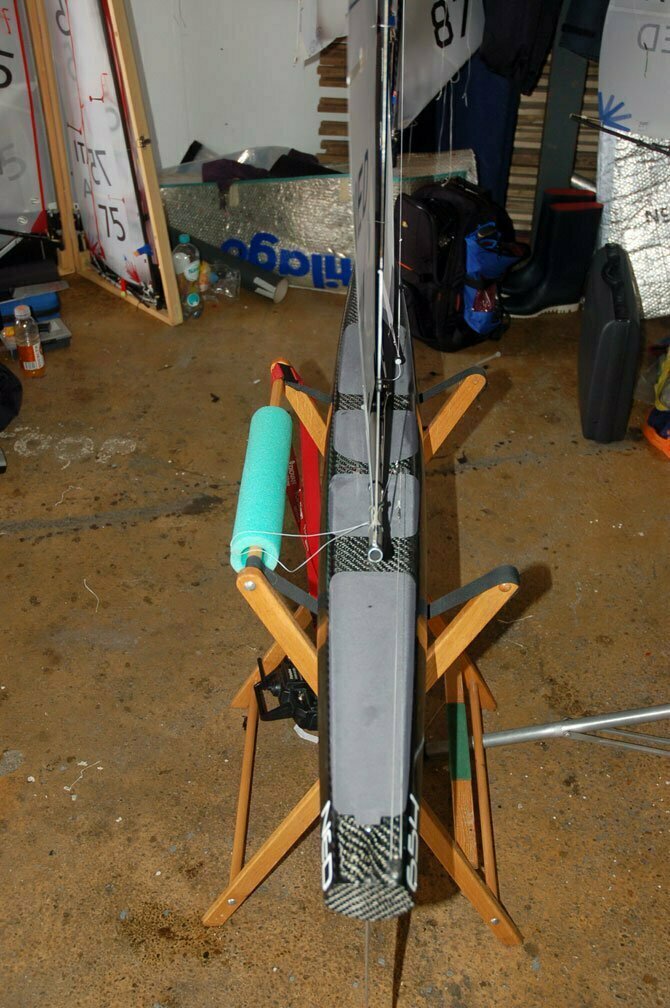 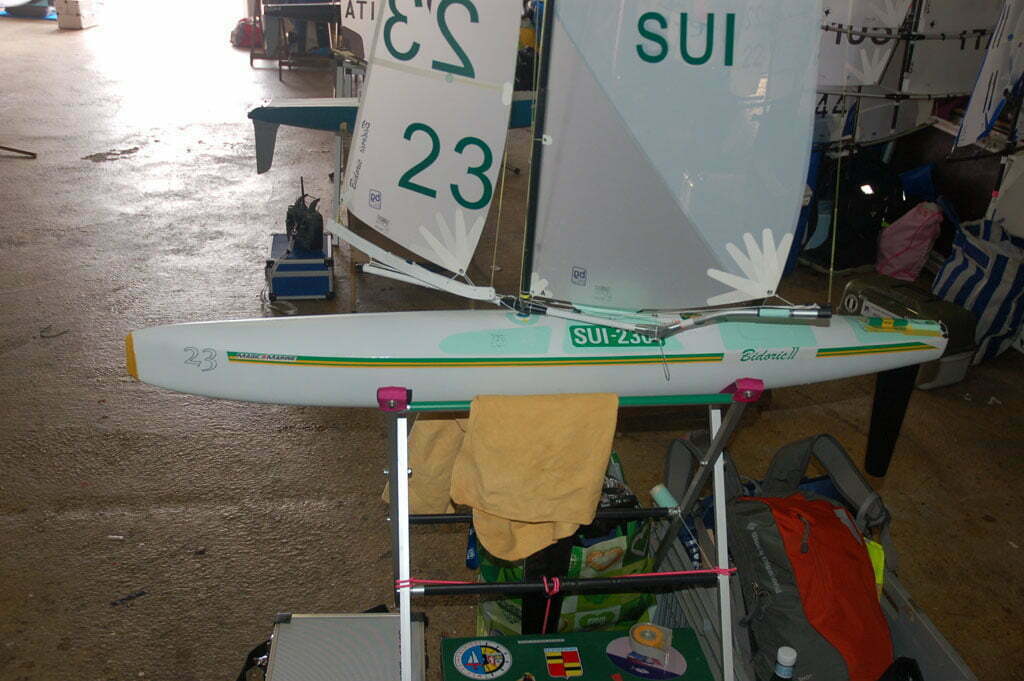 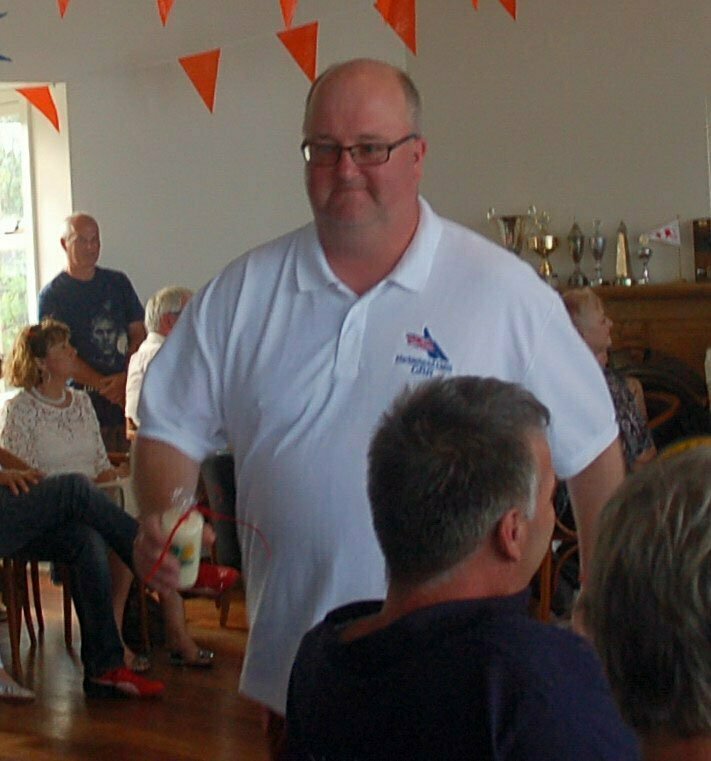 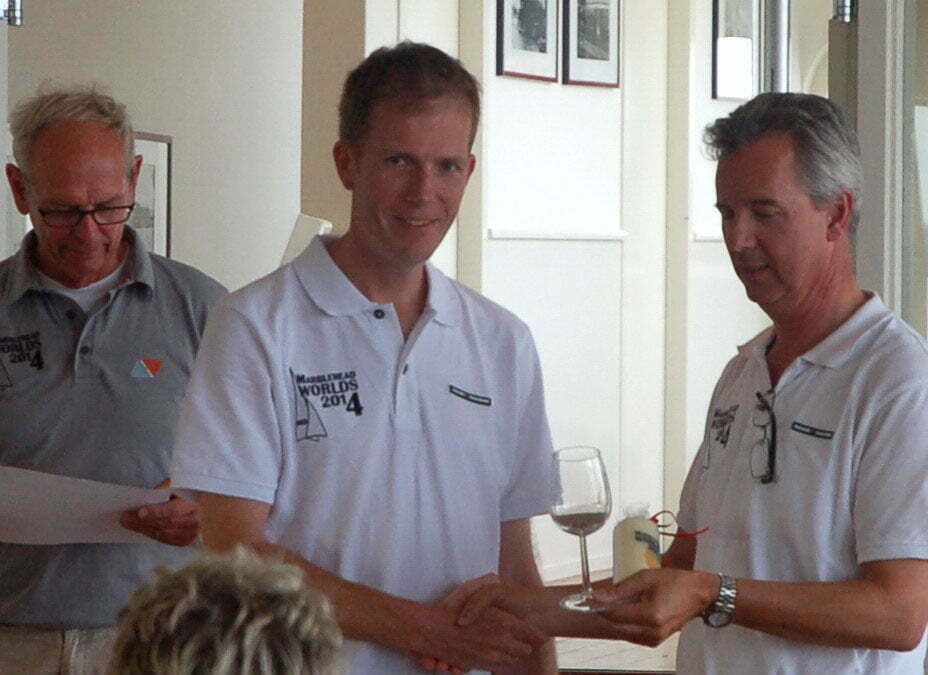 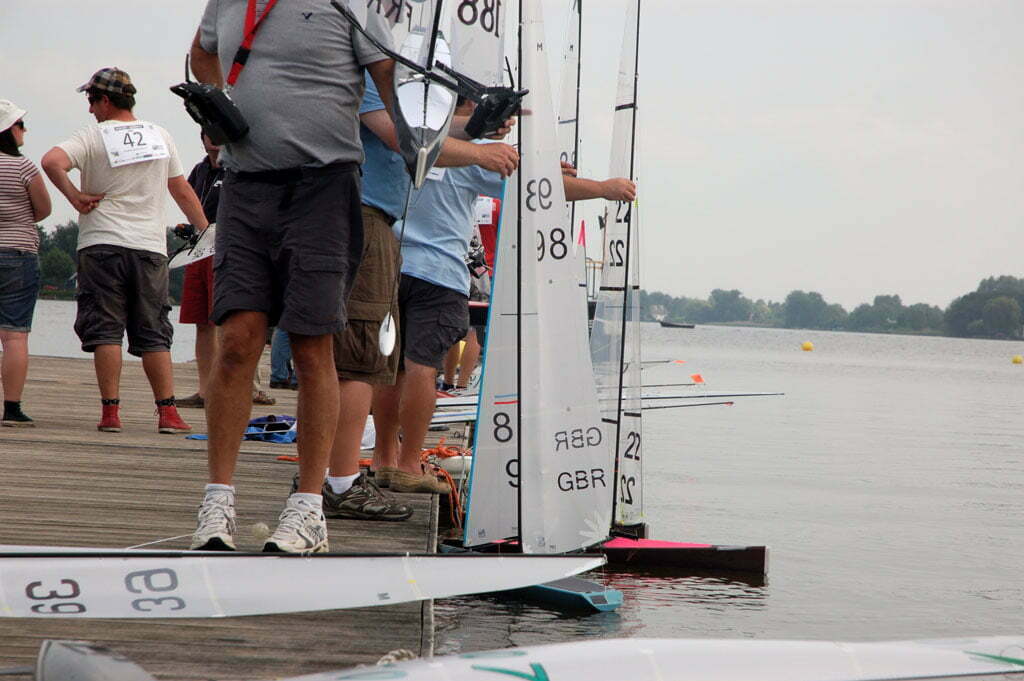 Round Three of the Midland District Champion Skipper took place at Watermead Lake in Aylesbury.…